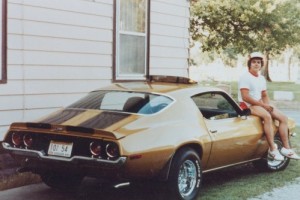 As we head towards the end of our week, we have two more entrepreneurs on the list. Today, we focus on John Schnatter. He’s a guy who sold his Camaro so he could expand the bar his father co-owned to offer pizza.

When we think of all the creative things that we could do to start any business idea we have, most of us aren’t willing to give up things we love in order to get what we want. Here is a story of a man who wanted more, so he was willing to sacrifice his beloved car to get ahead in life. John had this beautiful 1971 Chevy Camaro that he owned. He sold it because he believed in his dream. He believed in selling a quality product and having it available with the best ingredients he could offer, but with fewer options on the pizza crust. Starting with that idea, he now has well over 3,000 Papa John’s pizza stores in 50 states.

When I think back to the 1980s, I had a really nice Monte Carlo. I held onto that car until it was worth almost nothing. For a long time, I had a picture of it, and a plaque for having it in a car show at Liberty Park in New Jersey. One of the great things about that picture was it had the twin towers of the World Trade Center in New York in it. But when my belongings were stolen in 2003 that picture was in a box in that truck.

At the time, I would not have sold my car back to chase a dream like that. It would be hard for me to sell my motorcycle at this point to expand a business idea. John was 22 years old when he sold that car to build his business. At 22 I was afraid to part with things like that; it was not until I was in my late 20s that I was first told to get a dream, and learn to use those things I had to build that dream. That’s when I learned that you could always buy back those things at a later date. But it involves risk. I also know a man who took all of his retirement money and bought into a coffee franchise in a bad market, next to one of the most profitable Starbucks in his city. Within one year he was forced to close his doors because he could not pay his rent, employee wages, or keep supplies to make his products.

I know that Papa John’s pizza may not be everyone’s favorite. I know that Pizza Hut and Dominos were the chain delivery pizzas that we bought as kids. When I moved to Dallas I was able to taste Papa John’s for the first time. I loved the combinations and flavors that were offered. They were the first pizza place where I ordered my pizza online and it showed up at my door in under an hour. I was even more overjoyed because in my travels now I order Papa John’s Pizza many times from my iPhone app and it’s delivered to my hotel or other place I’m staying.

So why do I want to meet John? I want to know what he felt when he sold that prized car. Fear or sadness? I want to know if he had the faith that it was the best choice for him in business. Did he see his venture as so much of a success that he would never miss his car? I want to know what it feels like to reach the point of success in your life that you can buy that car back for about ten times the value of it.

One thing we can learn from him is how to sacrifice things when the time is right. Look around your life and home. What do you have of value that you could sell to build a business with? Are you willing to part with something like a prized car to build a business that could change your world? Many times when I coach people, they are starting over from a loss. They worked and worked to hold onto something that drove them to a point of failure. So let’s take this RockStar lesson from John Schnatter and build a better world.

I’m Tim Gillette the Rocker life coach. It’s time for you to live the dream you always wanted, to learn to love what you do, and those you share life with. Today is the time to become a RockStar in your world. If you’re ready to take the first step, I’m here to help you. Contact me today.