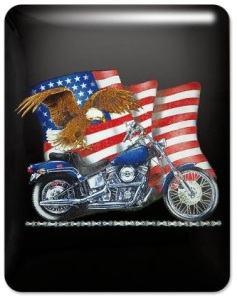 It’s Tuesday and another day of writing from the road. Yesterday in our travels I was called out on something I wrote in my own blog that I myself did not do. They say sometimes you, as the leader or teacher, learn more than the student. Well, we are working towards getting an iPad for this business and to use for other things in our travels. Yesterday, while visiting one of the Harley dealers, I picked up an iPad cover and said it would be cool to have that cover for my iPad when I get one. Then I put it back. Gwynne, being the great partner in life she is to me, said “I recall a story about curtains, how the person bought them as an act of faith towards getting a new apartment.”

Well, I still did not buy the cover but I spent the rest of my riding yesterday thinking about that. How many times do I put things off myself and, by doing so, rob myself of the very faith needed to reach a goal? Yes, I may have an good reason as to why now is not the time. Yes, I may be waiting for something else before I act. But in truth I had to ask myself how often I put off things in the name of being conservative with money or learning to control my spending.

So today, I’m going to continue what was started the other day, but add some great pointers as to when we make the steps of faith, how large those steps are, and when it’s really just a selfish trick to get what we want.

1.  Delayed gratification. Several months ago, I wrote a post about waiting to get things until the right time in life. There is a time for this and a time not to do this. When making those big purchases, this is a greatest practice to use. When a friend came to me last month to ask about buying her first house, she said, “I know you have bought a few; what tips would you give to us now?” I told her if she could afford a $200,000 house to buy one that only cost half that. Both she and her husband have good jobs, and have control of their finances, but if they buy less then they can afford there is room if one of them were to get laid off to continue making payments and not put them behind. When buying things like new car, or other large things, try to pay as much as you can in cash. Wait just a little longer before you make the choices that could cost you later.

2.  Pushing your faith. The example I used the other day was to purchase curtains as a statement of faith that a new apartment was coming. I am not a shopper for things like this, but I would think they would cost you less than you would spend on eating out in a month. So it’s a small token of faith that says these curtains only fit your new place. That part is the faith and the money part is not a great loss to put you in financial stress. In my case, the iPad cover it would cost about $25 to $45 because it says Harley. That is an act of faith whereas purchasing the iPad itself would be reckless right now and will be covered in our next point.

3.  Can you really afford it? When making purchases, especially of modern, high-tech items, (electronics, high-tech toys, sports gear) it is tempting to have the most recent, top-of-the-line things. Ask yourself before you purchase it: Can I really afford this? With all the new tablet computers, the new lines of thinner laptops, the newest version of your iPhone or smart phone, many times you can wait just a few months and save yourself a third off the price or more. Think about that in a day and time where phone contracts last two years but every six months a new version of the phone is out. Are you making the purchase in faith that it will bring you to a better point of reaching goals or are you paying twice as much just to make an upgrade so you can be the person in the office with the newest gadget? That is part of the reason so many people get themselves in money trouble buying things they can’t afford to impress people they can’t stand anyway.

Now back to what everyone is wondering, yes I’ll get one of the iPads eventually, but I have goals set in my life to make it a reward. It’s not an award for something small like selling one or two books. I do set my standards high and until I reach the goal I’ve set for myself and my business, I won’t buy an iPad. But I will make the purchase of the Harley iPad cover on this trip as a step of faith. This time, I’ll practice what I’ve preached.

I’m Tim Gillette, the Rocker Life Coach. It’s time for you to live the life you always wanted, to love what you do and those you share your life with. What act of faith will you take today to become the RockStar in your world?

One thought on “There is no Try, there is only Do.”